Why We Invested: Emerging Leaders Foundation

With 70% of sub-Saharan Africa under the age of 30, Africa has the youngest population in the world. Yet the continent continues to grapple with the exclusion of its young people from development processes, with the majority finding it difficult to get involved. Key barriers to entry are a lack of role models and mentors to help young people navigate complex governmental systems and limited opportunities for personal development. In Kenya, for instance, youth under the age of 35 comprise over 75% of the country’s population, yet make up just 6.5% of the current Parliament.

The Emerging Leaders Foundation (ELF) is a youth-centric nonprofit founded in 2012 that provides practical, values-based leadership development, mentorship, and governance and livelihood training to promising young Africans so that they can drive sustainable social, economic and political transformation in society. Their programs, which run from six months to a year, target young people, many of whom run small civil society organizations in their communities. They reach out to potential candidates through social media, alumni referrals, community-based organizations and local learning institutions.

When I shared my life experiences with others during the training, I felt validated and that my work was seen and heard.

Owning Your Story to Create Positive Impact on Your Community

Starting from the idea that youth agency is a key component of empowering individuals to make a positive impact on society, one of the main focus areas of ELF’s curriculum is teaching young people self-awareness, self-confidence and communication skills, particularly storytelling.

“Storytelling creates interest among young people, provides meaning and establishes emotional connections,” says Caren Wakoli, ELF Founder and Executive Director. ELF participants also complete a life mapping exercise, which “helps them to appreciate the role that previous experiences and events have played in who they are today.”

Amisa Rashid, an outspoken advocate of mental health in her community of Kibera, is one of the young people trained by ELF. She is the founder of Nivishe, a grassroots organization that focuses on supporting teen mothers with mental health services and building resilience using localized mental health interventions, such as peer counseling and community workshops.

The loss of a close family member initially sparked Amisa’s passion for mental health. She was hard-pressed to find support within her community to deal with her grief in addition to the challenges of navigating life in an ethnically vulnerable community. She stumbled upon a call for applications for an ELF training and was chosen to participate. The training, dubbed “My Sister’s Keeper,” was a six-month program that taught women how to analyze policies with a goal of improving healthcare by strengthening the relationship between practitioners and the communities they serve.

“When I shared my life experiences with others during the training, I felt validated and that my work was seen and heard,” Amisa says. “The training by ELF equipped me with the skills to do more and to reach out and network with other like-minded leaders.”

During the COVID-19 pandemic, Amisa’s advocacy and networking skills came in handy. She realized there was a gap in information on mental health in her community, especially for young people. She reached out to her local radio station to start conversations among young people about the challenges they experienced. To date, more than 300,000 listeners tune into her weekly show on Pamoja FM and her foundation has reached more than 10,000 residents with mental health services. 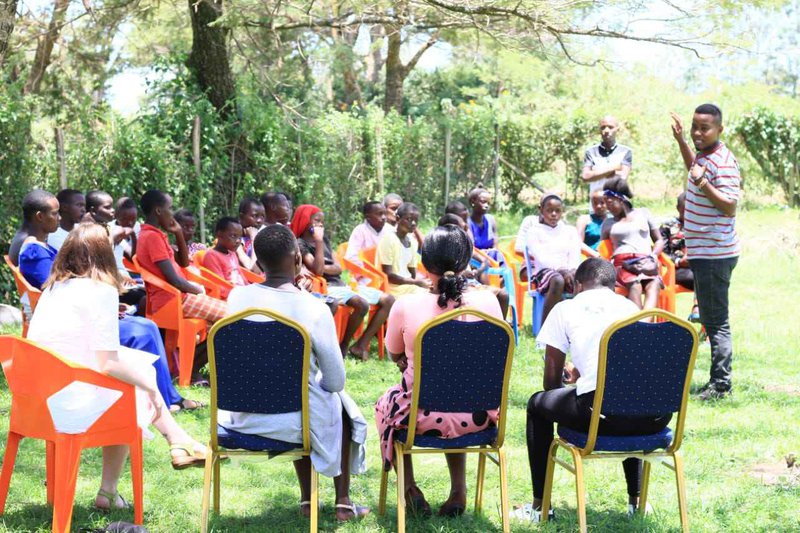 The Transformational Role of Mentorship

Imaginable Futures invested in ELF because they showcase the transformational value of mentorship in shaping the life trajectories of young Africans and the impact they have on their communities.

Miles away from Amisa’s Kibera community is another emerging leader, Vincent Mwita, who is leading the fight against Female Genital Mutilation (FGM) in Kenya’s Migori County. Vincent is part of ELF’s ‘Tunaweza’ Swahili( for ‘We Can)’ program that helps youth meaningfully engage in civic, democratic and economic spaces, spurring community-driven development. The initiative brings together key decision-makers and institutions in the same room with the young people they aim to impact.

Vincent has spearheaded campaigns that have mobilized community, media and government officials to provide safe spaces for young girls and curtail the practice that threatens the future of his community. Vincent credits his growth as a community leader to ELF’s support, which includes assigning mentors, many who are ELF alumni, to their trainees for one year.

“The support of ELF has given me the courage and tools to forge on with my calling and to support the young women in my community,” says Vincent. “They are always willing to walk with me, invest in my growth as a young leader and that makes a huge difference.”

Since its inception 10 years ago, ELF has supported over 10,000 young men and women through life skills training and mentorship, increasing young people’s civic consciousness and practical exposure to the world of work. Nearly all – 98% – of ELF alumni are employed, running their initiatives, or involved in volunteerism around their communities. In advance of Kenya’s 2022 general elections, ELF began the “Good Politician” program to nurture a cadre of principled young politicians, who bring values-based leadership, moral courage, and imagination to their pursuit of making democracy work in Kenya.

“We intend to have a footprint in all the 47 counties of Kenya. We also look forward to reaching 10 million youth from different parts of Africa and to grow a solid Pan-African network,” says Caren.

The challenge of civic youth participation in the world’s youngest continent is no small task. ELF’s work demonstrates that with the right tools, Africa’s vibrant young population represents an unparalleled opportunity to strengthen and secure its future.