Funding Basic Needs for All Students, Including Those Raising Families 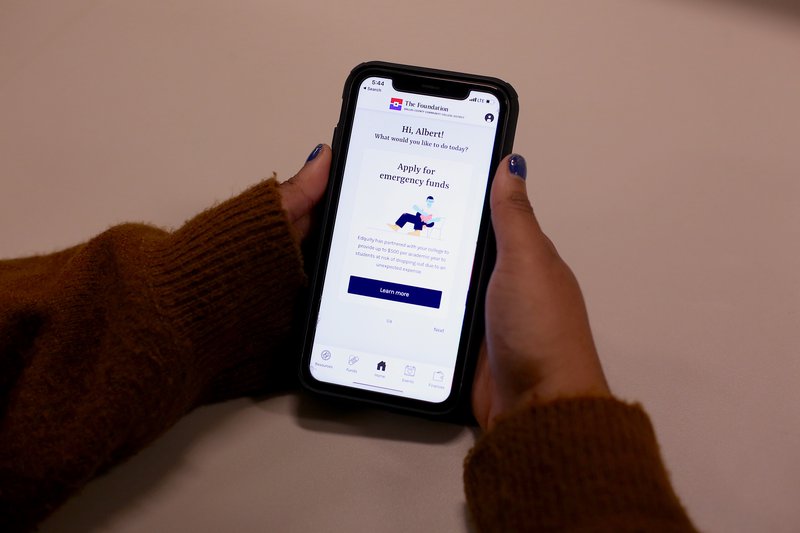 Last October, 10 tornadoes ripped through the Dallas area within a single week. The costliest cyclone event in Texas history, it left

and thousands of displaced people in its wake. Many of them were college students.

Desperate to act fast, the Dallas County Community College District (DCCCD) partnered with Edquity, a mobile app that enables students to obtain emergency funding swiftly and from anywhere. By week’s end, Edquity granted over $68,000 to nearly 265 applicants in Dallas — about a third were tornado victims and nearly 40% were students raising children while attending school. While it was a heroic effort in an extreme situation, every day is a financial struggle for most college students across the US.

Not all college students are the young, well-heeled, carefree kids as seen in popular culture. Close to half of the nearly 17 million students enrolled in two-year and four-year higher education institutions, suffer from housing and food insecurity at any given time, a disproportionate number are students of color, first-generation or community college students. Each year, 3 million students are forced to give up pursuing their degree because of financial burdens of $500 or less.

Students raising children face even stiffer odds. Student parents have fewer financial resources than their childless counterparts, according to a September report from the US Government Accountability Office. Factor in the high cost of childcare and other living expenses, and it’s no wonder that student parents are 10 times more likely to “stop out” – a term we prefer to drop out because many students hope to re-enroll. The result: An increasing number of student parents have college credits but no degree.

It’s a losing proposition for everyone involved. Postsecondary institutions miss out on significant revenue and the overall economy is taxed by a less qualified workforce. However, no one pays more than the students. “[They are] nearly twice as likely to be unemployed as college grads, and they are four times more likely to default on student loans, thus wrecking their credit and shrinking their career options,” writes David Kirp, professor of public policy at the University of California at Berkley in his book, “The College Dropout Scandal.” This is a national crisis that needs multiple layers of interventions.

Colleges and universities are increasingly getting involved with 82% of institutions offering some form of emergency aid, as of 2016. Some provide loans and campus vouchers to restricted grants and food pantries, but recently unrestricted emergency aid grants have become more prevalent. The problem: These more flexible programs are extremely inefficient, sometimes taking several weeks to approve applications, resulting in time lost that a student struggling financially cannot afford.

The founders of Edquity created a solution to address this crisis by partnering with postsecondary institutions to offer a tech-based platform where students can efficiently request emergency aid. After students spend five minutes filling out an application, the Edquity algorithm conducts an instant approval or denial for emergency aid. Upon approval, a student receives a gift card for instant redemption or a cash deposit directly into their accounts within 48 hours or less. Instead of waiting for student support offices to open, students can apply for aid anytime they want, whether it’s midnight or 6 am.

Edquity isn’t only emergency aid funding. The app also features a resource portal, providing a central hub of emergency resources near college campuses including food, housing, transportation and, most importantly, childcare. Students can also use Edquity’s personal financial management tool to track spending and connect directly with a network of resources. The institutions receive insight into a student’s risk of stopping out, and data on whether deployed emergency resources are effective.

At Imaginable Futures, we see postsecondary completion as a path for economic mobility and overall family well-being. We want more of those graduates to be parents, who account for 25% of those enrolled in postsecondary institutions. All students, but especially student parents, need timely access to resources and financial assistance to keep them on the path to success.

At Imaginable Futures, we see postsecondary completion as a path for economic mobility and overall family well-being. We want more of those graduates to be parents, who account for 25% of those enrolled in postsecondary institutions. All students, but especially student parents, need timely access to resources and financial assistance to keep them on the path to success.

Since launching with DCCCD in Texas, Edquity has served over 190 students, predominantly low-income students, students of color, student parents, and other underrepresented students who are financially vulnerable. Of all applications processed to date, 76% experienced housing insecurity (22% experiencing homelessness), 54% experienced food challenges, and 39% had children. Edquity is shifting how colleges and universities address basic need insecurities for all students including student parents, doing so in a data-driven and empathetic way. We hope that our support of Edquity will help prevent stop outs and increase persistence and degree completion for more students nationwide.