Holberton students outside the new campus in Bogotá, Colombia.

Nearly two years ago, our team at Omidyar Network Education invested in Holberton School. At the time, Holberton had a single campus in San Francisco. We were excited by their innovative approach to democratizing access to software engineering, so that a more diverse set of learners could develop career skills and competencies and thus increase their economic mobility.

For example, students like Max went from living out of his car to earning four times his prior income as a newly minted software engineer. Dora went from working at a Trader Joe’s to becoming a well-paid programmer. And Adekunle, a dad of two children who always dreamed of becoming a software engineer, took a risk and moved his family to Silicon Valley to pursue a new career. After one year at Holberton, Adekunle is now earning a six-figure salary at a financial tech company while finishing his second year at Holberton and says he is, “living the dream.” Holberton is now training their ninth cohort of students and enabling hundreds of students like Max, Dora, and Adekunle to achieve their own dreams. But they aren’t stopping there.

Adekunle, a second year Holberton student and parent of two, now works as an engineer in Silicon Valley.

Following our 2018 investment in Holberton School, opportunities arose for them to expand further in the US and even into new continents — first in South America and now, most recently, Africa. Holberton School is now operating six campuses across three continents: in San Francisco and New Haven, Connecticut, in the United States; Bogotá, Medellín, and Cali in Colombia; and Tunis, Tunisia. We are excited by the demand Holberton is seeing for their program because of the challenges they are addressing: diverse, quality talent. 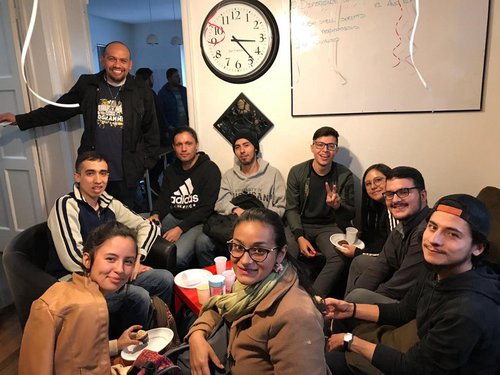 Holberton School is addressing a massive talent shortage in software engineering, where demand is outpacing supply of talent across the globe. In the United States, the software job market faces a tech talent need estimated to be nearing 500,000 jobs. Similarly, outside of the United States, software engineering is the most in-demand profession globally, ranking first across 24 countries according to a recent global analysis by Michael Paige.

Holberton School is addressing a massive talent shortage in software engineering, where demand is outpacing supply of talent across the globe.

While software engineering needs are sizable across regions, access to skilling opportunities and to employment for young adults looks very different by region. In the United States, youth unemployment is close to all-time lows at around 8 percent, while it hovers at 13 percent globally for young adults, with some lower income countries being most impacted. For instance, South Africa, a country where Omidyar Network Education invests, has the highest rate of youth unemployment at 55 percent — suggesting massive skilling gaps that organizations like Holberton School can tap over time. Even for those employed, the quality of jobs is often challenging. The International Labour Organization estimates that 156 million (or 38 percent) employed youth in developing markets are living in extreme or moderate poverty (less than $3.10 per day). Without purposeful work and a living income, over a third of global youth in developing markets is vulnerable to a lifecycle of poverty. They naturally seek economic opportunity through migration. Globally, seven out of ten migrants is an adult of working age. According to the United Nations, the highest inclination to move abroad for economic reasons, at 38 percent, is found in sub-Saharan Africa and Latin America and the Caribbean.

While Holberton School won’t solve our global skills crisis alone, they do have the potential to change the lives of millions. For Holberton students, it does not matter where you start, your country of birth, your prior credit history, your parents’ ability to co-sign or support, or even your past education record. The admission process is designed to be totally blind, selecting students based on their potential to perform in the program, not what they know today or their background. The result is a class of software engineers who are more representative of the general population with more women, more racially diverse students, students from all age groups, some caring for children and families, and from different social and economic situations.

The admission process is designed to be totally blind, selecting students based on their potential to perform in the program, not what they know today or their background.

After two years of training by Holberton on both full-stack software engineering and other critical workplace skills and competencies, employers are hiring Holberton students. In the US, companies like Apple, Facebook, and Tesla are employing Holberton students at a median starting salary of $107,000 per year. Rappi in Colombia and VERMEG in Tunisia have partnered with Holberton School and are awaiting the first class of graduates in their countries to start hiring.

In addition, the Holberton School education model is software-led and peer-to-peer based, resulting in low needs for trained teachers per cohort, which is key for scalability and consistency in the quality of the model delivery in growing economies. Holberton School addresses the critical challenge of teacher shortages across the globe and in developing countries in particular. UNESCO estimates that the world will need 69 million new teachers to reach the 2030 Sustainable Development Goal in education. Ninety percent of countries in sub-Saharan Africa have an acute need for teachers in secondary education, with similar trends in tertiary education. As an example of the Holberton School model’s efficiency, the grading of student work is automatically done via software, and students can request and get an instant correction. Across the six Holberton School campuses combined, it would take 600 instructors to correct the students’ work.

With our education-focused investments at Omidyar Network, we seek to unlock human potential by catalyzing people, systems, and ideas. Holberton School fits into our global portfolio of companies and organizations who are transforming lives and unlocking potential through skills development and assessment including: eduK, Digital House, Laboratoria, and Platzi in South America; Andela and African Leadership University in Africa; and Anudip, Aspiring Minds, and Dream a Dream in India. We are proud to support our investees in expanding their reach globally to impact millions of trajectories — for individuals, families, and communities.